by Abbas A Malakar 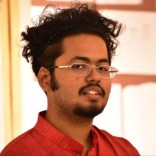 Abbas A Malakar is a student of Art History pursuing…

Aftermath of a Pandemic: Arts, Artists and Survival

An unreal reality. Or perhaps too real.

Zdzislaw Beksinski was born on 29th February 1929 in Sanok in Poland and died on 21st February 2005. The scale and draughtsmanship of paintings came from his technical training as an architect while the use of expressionism and ambiguity can be traced to his practise as a surreal and fine art photographer. He started with photography just after World War II during the Russian occupation of his country. Before he began painting, photographs were his chosen medium of expression and he experimented ceaselessly with forms, frames, light and subject. He did this to the extent that they were sometimes deemed “anti-photography” as against the photographic norms of his time. His experimentations with different mediums remained a constant throughout his life as he drew, painted, photographed, wrote and used computer graphics to express himself. All of this has inspired a lot of music, poetry and stories across the globe; however, what we know him for most is his self-proclaimed ‘fantastic period’ paintings between 1960 to 1990. A massive repertory of grim dreamscapes.

My first contact with Zdzislaw Beksinski’s works was by accident. The same kind of accident that repeats everyday on Instagram. I was of course immediately taken aback by the sheer scale and skill of his works. Who is this person, I thought to myself, that draws such complex and dark forms? So many aesthetic elements were so close to modern fantasy genre images- such as those of DARK SOULS or WARHAMMER- that I was surprised he had been painting such works since the 1950s. He had created and developed a realm of images far ahead of his time.

Each character that can be made out seems to be alive in a way that they have had a past. They did not spring from nothing and exist outside the fixed space and time that the painting captures. Here lies the narrative magic of Beksinski’s works. No story is written yet the visual implications of a greater expansive world cannot be ignored. A world filled with magnificent gothic structures which have fallen prey to the corrosive powers of time. This extensive world draws the audience inward. As each new painting reveals a new and fantastical dimension to his tormented realm, we are overcome with imaginations of the different possibilities of this surreal apocalyptic world.

The artist is known to have been listening to classical music when painting his ‘fantastic’ works. A world I perceive as one of slowness and stillness, of living death. Take in the view then close your eyes. Try and put your ears to the image you just saw. Any movement is bound to create noises- creaking and scraping on rough surfaces. Maybe I hear an occasional scream or some sort of music in the distance but it is overwhelmed by the crackling of burning cities. Eerie, spooky sounds must fill the void. Rushing winds pushing and carrying sand and dust from a dead past. Hushed voices of defeated forms, whispers in languages that do not make sense any more. This feeling of quietness takes some time to discern but promptly unsettles the viewer once they recognise it.

The only softness is of the bodies. Bodies that lack completion or rather have shed their previous forms to become partials of themselves. Unidentifiable figures in inconceivable pain. His humans, if we can manage to use that term, are clinging on to a life that has left long ago in a grand world- now fractured, defecting and breaking down. Their flesh is often as if made of bones- visible under depleted, decayed and abused skin. . Sometimes as solid as rocks and sometimes as translucent beings of heavy contrasting colours. They are icons of insanity and corruption of the inner and outer realms of being. Unique yet non-individual. Moving and twitching ever so slightly as the world around it dictates.

Every form is a composite of more than one thing. Architectural structures seem to be made of bones just as humanoid forms become part of the architecture. Each character entangles itself with and becomes a part of its surrounding elements. Dark colours fade into darker ones as unnatural hues light up both forms and spaces. What is dead seems more alive and what was alive is now dying. The individual and the communal are inseparable yet there is a deep sense of isolation and loneliness. These humanoid forms may be lost but they do not seem to lack passion. What that passion can achieve is another question though. Miserable conditions do not take away the sensuousness of form. There are often sexual undertones to many of the paintings while some are overtly erotic. The abilities to act on feelings are lost yet the emotions haven’t died within these bodies. There is an urgency that translates into physical tension but not in movement. As if all the desperation visible in the tortured bodies are final. All actions to transform for the better are to no avail, if even possible.

The world itself seems disorganised. Bodies and forms senselessly compile on each other. They revolve, contort and collapse both inward and outward throughout the panorama of his works. There does not seem to be any order to these movements. There is no chaos in their actions. A corrupt system that is still functional but minimally. They are holding on to past ornaments through actions that I can identify at best as a sort of choreographed anarchy. We are confronted by images of exhaustion and dementia in an infernal harmony where the darkness of the subjects runs parallel to a fiery luminescence.

Beksinski’s world is made up of everything real, twisted to the point where they are barely recognisable so that we are in awe of what we see every day. Yes, all of surrealism tends to do that so why does Beksinski stand out? Readability. We may feel as if we are audiences to an incomprehensible realm but we definitely feel connected. We understand where these images are coming from. They are not just in his mind. Majestic representations of unearthly beings inherent within and around us. Their mental and physical distress is as clear as anything. Though bitter and maligned in form, there is no intent to harm. The impact is great but the idea of these forms materialising is still a stretch. We are struck therefore not with fear but a deep awareness of what is around us.

It was easy to imagine but hard to accept these visions. I feel it is an untold epic waiting to be interpreted and narrated. It demands my attention. In a trance I entered his realm. Then I was one among crude remnants of an unrecorded past- scraping along on desolate, lifeless soil under burning skies. What was there before everything fell to such barrenness? Look past the immediate scenes. Wars had been fought. Kings have risen and perished. Empires have been decimated. Execution slaughter, famine, drought and epidemic. What remains are memorabilia of spent civilisations and shrines to dark gods present. Whatever corruption grew was not forced onto these spaces. It seems organic and its maturation has led to erosion of forms and depletion of life.

As I stand in reverence of his apparitions I ask myself, are they aware of me as I am of them? Do they or would they care? Some of his phantoms do indeed look right into the audience’s eyes. From within immensely deep fields of almost nothingness, they stare with intent to breach our minds. Can they look into me as I read into them or is this just a shrewd trick, devised to broach deeper themes in society? What does their gaze reveal? Shame of some kind perhaps. Shame at how we conduct ourselves as a society and a civilisation. Not a dystopia then, a dark satire.

Today glamour, shine and happy endings have been deemed absolute. We live in denial of war, hunger and poverty. We seem to have cancelled all things sad and disturbing with sex, drugs and high definition romantic action movies. Social media is all flowers, people dancing, blue skies and cute cats. We give up privacy and integrity for greed and lust. In light of the decadence we glorify in the name of a liberal capitalist staircase of a society, Beksinski’s works are probably more real than the reality we are being trained to acknowledge.

Amazing!
0
In Love with this Piece
0
Makes me think!
1
Mind-blowing
2 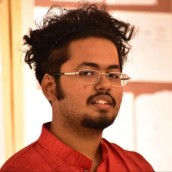 Abbas A Malakar is a student of Art History pursuing a Bachelor’s degree in Kala Bhavana, Santiniketan. He has a keen interest in theories of visual perception, representation and aesthetics. For this, throughout the past two years, he has been invested in understanding the dynamics between art and audiences around Kolkata. He also works with public art and postcard making.

Mibin & the Marginalised: Reclaiming the Centre