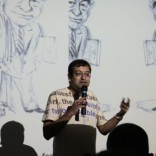 Dr Souvik Mukherjee is an Assistant Professor in Cultural Studies…

The first time I literally ‘walked into’ a favourite Renaissance painting of mine is going to forever remain a life-changing experience. The painting in question is Hieronymus Bosch’s scarily awe-inspiring triptych, The Garden of Earthly Delights and after entering the gruesome horrors of Hell, I was viscerally terrified at the fates that potentially awaited me if I ended up in that dark world. This was, of course, a VR version of Bosch’s painting that I opened using an app on my Android phone and Google Cardboard.

Imagine what happens when a visitor inside the landscape can actually change what happens in there and interact with the characters as players of videogames such as Red Dead Redemption or Dark Souls will tell you.

Anyone who has played the videogame Dark Souls will not fail to notice the striking similarity with the German Romantic painter Caspar David Friedrich’s paintings and the kinesthetic experience, for this is a scene as much experienced with the hands as well as the eyes and ears, unfolds within the frame of the Gothic in a way that it evokes feelings of fear, awe and might one say, the Sublime.

One could provide many more examples and some videogames self-reflexively pay tribute to earlier visual media – for example, The Ghosts of Tsushima has a Kurosawa-mode where the the game takes on a grainy, film stock look taking after the black and white samurai films made by the legendary Japanese filmmaker, Akira Kurosawa.

New Media theorists, Jay David Bolter and Richard Grusin, have a rather useful (and oft-cited) term for newer media that reshapes and recomprehends older media: remediation. Videogames, like many other digital media, remediate earlier artistic forms. Of course, the late film critic Roger Ebert had famously (or rather, infamously) declared that videogames cannot be art arguing against their ability to provide an original and authentic artistic experience. Ebert’s main contention was that games are a malleable media and that it is possible to win or lose games and as such, they could not be called art. Since then, many game designers and scholars have both agreed and disagreed as Felan Parker’s essay ‘Roger Ebert and the Games-as-Art Debate’ demonstrates. Ebert himself later conceded that he should not have commented on a medium that he did not know well in a somewhat backhanded apology rendered after being attacked by thousands of people who disagreed with him. Ebert’s insistence on videogames not being artistic enough because they lack a specific identifiable author (indeed the player of such an interactive medium or even the participant in the VR Bosch software that I described could claim some levels of authorship) is problematic if one is to agree with poststructuralist positions such as the philosopher Roland Barthes’s on the death of the author.

Henry Jenkins in his essay ‘Games: The New Lively Art’, for example, counters Ebert’s position stating that videogames had ‘the potential to be the exemplary art form of the current digital age in which computers are so central to everyday life’. In his notion of lively arts where he draws on the work of Gilbert Seldes, Jenkins argues that the forms of popular art such as interactivity, spectacle and entertainment that high culture often ignores are actually the most appealing qualities of art. Seldes, incidentally devotes an entire chapter on the 1920s comic-strip Krazy Kat extolling its importance as art. This author is reminded of the impression created on first seeing Roy Lichtenstein’s Whaam! on the walls of the Tate Modern.

Ebert, of course, has supporters even among game designers (such as the legendary Hideo Kojima) and other media personalities as Jonathan Jones argue that videogames are playgrounds rather than art, perhaps making a not-so-subtle allegation of childishness. Despite his later concession, Ebert’s comments caused a two-fold damage to the public reception of videogames; as Parker notes astutely, ‘Ebert’s sensational arguments and limited aesthetic framework drastically narrowed the possibility space for popular discourse on games and art and that it is still recovering. Moreover, the false sense of oppression Ebert’s comments provoked in gaming enthusiasts and the crude vitriol heaped on him in “defense” of games prefigure the increasingly aggressive territorialism of “hard-core gamers” in recent years and the ongoing harassment of numerous prominent women, people of color, and queers involved in games’.

Such sensationalism and limited thinking around the medium is rather ubiquitous. Together with the highbrow versus popular culture tussle there is an additional problem: that of the digital divide. In India, for example, the attitude towards videogames ranges from a confused ambivalence to resistance for policymakers, educators and public intellectuals. On the other hand, a large section of the younger population, in particular, engages with videogames on a regular basis: the recent popularity of mobile games has added to this. There are also cultural value judgements both pro and contra videogames and the recent controversies around PUBG (Player Unknown Battlegrounds) or its newer version Battlegrounds India are cases in point.

Videogames have a significant impact on culture and part of the reason is their rich storytelling potential, about which much has already been written by Games Studies scholars. Their artistic potential is also beyond question as some videogame titles from India such as Nodding Heads’ Raji, Studio Oleomingus’s Somewhere and Frostwood Interactive’s Forgotten Fields will easily testify. The beautiful environs of Raji draw on Rajasthani architecture, Balinese painting and the tholu bommalata shadow puppetry of Andhra Pradesh. In fact, the game mechanic consists of reconstructing memories using beautiful kolam art.

Understanding song-text: A study of khayal compositions in Hindustani music

Somewhere explores issues such as agency and subalternity in a surreal environment and Forgotten Fields is a videogame about nostalgia and memories that is set in lush green coastal India and presents a very different visual spectacle. All of these feel kind of like walking into a painting and having the various elements come alive.

India has no videogames museum and to my knowledge none of the extant museums and art galleries have exhibited videogames in any form. Despite all the controversies, leading museums the world over have hosted exhibitions of videogame art, videogames as cultural media and as technology. The Museum of Modern Art (MoMA) in New York has a permanent exhibition of videogame art, the Smithsonian American Art Museum (SAAM) organised the ‘The Art of Videogames’ exhibition where 3.7 million votes were cast by people in 175 countries to decide which games were selected and the Victoria and Albert Museum (V & A) hosted another exhibition in 2018 called ‘Design/Play/Disrupt’. There are also a number of exhibitions in Japan, China and other countries that feature videogames art. Maybe instead of dismissing games as childish, castigating them as evil or making judgements without having played them (as Ebert later admitted to having done), perhaps the way forward in India is to engage with them as a media worthy of serious academic attention and of course, entertainment and fun. Museums and curated exhibitions of videogame could help shape gaming culture in a way that uses the media responsibly and shapes the way art and storytelling can be rethought in the time of digital media.

To return to Bolter and Grusin’s concept of remediation, I see it implying a re-mediating in the sense of the creation of new media with the influence of the old and also that of mediating between one medium and another as well as between the medium and the audience, yet again. For me, remediation also carries the sense of ‘remedy’ or a cure from the tedium of extant media practices and a way to engage with media is newer ways. Just as I was mesmerised by Lech Kowalski’s film, The Mill and the Cross, which remediates Pieter Bruegel the Elder’s The Procession to Calvary, I am also thrilled by Joe Richardson’s videogame The Procession to Calvary.

Likewise, my walks in Assassin’s Creed games or in The Witcher 3 are experiences I treasure and learn from. Interactivity does not detract from the artistic experience and just as the reader of a text is effectively a (w)reader or someone who writes into the text she reads, pace Roger Ebert, no work of art is entirely static and the viewers read their own meanings into these. Videogames merely make the process a tad obvious.

*The featured image is Dhruv Jani’s artwork from Under a Porcelain Sun.

Amazing!
1
In Love with this Piece
0
Makes me think!
0
Mind-blowing
0 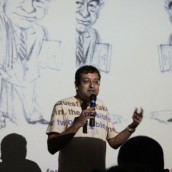 Dr Souvik Mukherjee is an Assistant Professor in Cultural Studies at the Centre for Studies in Social Sciences Calcutta, India. Souvik’s research looks at the narrative and the literary through the emerging discourse of videogames as a storytelling media and also a broad spectrum of topics in Game Studies ranging from postcolonialism and videogames to the videogame industry in South Asia. Currently, he is researching how certain ancient Indian board games contribute to the understanding of gameplay. Souvik is the author of three monographs, Videogames and Storytelling: Reading Games and Playing Books (Palgrave Macmillan 2015), Videogames and Postcolonialism: Empire Plays Back (Springer UK 2017) and Videogames in the Indian Subcontinent (Bloomsbury India 2022), as well as many articles and book chapters in national and international publications. Souvik has been named a ‘DiGRA Distinguished Scholar’ in 2019 and a Higher Education Video Game Alliance fellow in 2022. He is also an affiliated senior research fellow at the Centre of Excellence, Game Studies at the University of Tampere.