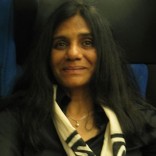 Yashodhara Dalmia is an art historian and an independent curator…

Sayed Haider Raza was one of the greatest painters of modern India. Yashodhara Dalmia’s book, Sayed Haider Raza: The Journey of an Iconic Artist, traces his journey from Barbaria in Madhya Pradesh, his birthplace, to his involvement in the founding of the Progressive Artists’ Group in Mumbai, his impact on the international art world in Paris, and his subsequent return to India in his final years. Interwoven into the fabric of the narrative are snippets of his personal life. Dalmia’s nuanced rendering of Raza’s biography owes its origin to the letters, reminiscences and writings of Raza’s friends and critics. The biography is accompanied by reproductions of S. H. Raza’s masterly work.

In his exploration of colour and its emotive qualities, Raza was to stumble upon his childhood memories and the vast universe of inchoate experience. The floodgates of the past were now opened and there would be no holding back. As he stated, ‘I have never really left the deeply rooted, wonderful world of forest and rambling river, hill and sparkling stream. The time spent as nature’s child. You see, we lived in the country’s core, in Barbaria, Madhya Pradesh, where my father was a forest ranger, and in Mandla afterwards. The lush Kanha thickets were my regular haunts. Highly impressionable at that tender age, I soaked in every single feature of that beautiful landscape. So, I let my mind wander. But that was precisely the problem. It wandered excessively, making me, I’m afraid, the worst, most distracted pupil in my class. So that was when it happened – my introduction to a certain idea which was later to become my leitmotif, an integral part of my art, the very backbone supporting my body of work. This was the concept of the Bindu. How can I ever thank school teacher Nandlal Jharia? He left an absolutely indelible mark on me. Noticing my restlessness, it was he who made me wait behind suddenly one evening, facing one of the whitewashed walls of the classroom. On this he drew carefully with firm, strong hands, a large, dark circle. Just that, stark against its clear background. “Is bindu par dhyaan do” (concentrate on this round spot), he instructed. I tried that. It was difficult not to be distracted at first, but then I got his point. Gradually, blotting out much else, my mind settled down to focus solely at that centre. It was uncanny. Savouring every one of its essential requisited colour, line, tone, texture and space. I found myself riveted.”

When the circle emerged in Raza’s work it enclosed vibrant, gestural strokes in passionate colours seeming to enclose radiating energies. An early work titled Mandala (1975) signified the notion of a centrifugal force of great dynamism, which by its power could generate the flow of the universe. It was the iridescent centre, which emanated the creation of the cosmos. The emergent image of the circle within the square became the pivotal point of his work. The frame of the canvas itself would have red, black and yellow interlocking and unfolding, at the centre of which, ensconced within a square, would be the throbbing dark circle. The painting Bindu (1980) had the black orb as its central axis where the swarming, vibrant red and black courses through the space of the square.

In the masterly work Maa (1981), flaming tongues of colours on one side are juxtaposed with the black, still centre on the other, both equipoised as darkness is to light, movement to stillness, action to reflection. The emerging and recessive depths of the painting are the opening gateways of consciousness tautly contained within the flickering framework of red and black suggesting an iconization of the work. Below the painting, in a manner reminiscent of the miniature tradition is the inscription ‘Maa lautkar jab aaunga, kya launga?’ (Mother, what will I bring when I return). The yearning for home, with its blazing colours, overflows and is reconstructed in a symphonic movement.

These words from a poem by Ashok Vajpeyi became an oneiric truth for Raza in his sublime creation, Maa. It also suggested his own restless longing for the home of his childhood. In the ’70s he began to visit India increasingly, travelling all over the country, and in consonance with this, his Indian identity came to the fore. He would seek out writers, poets, artists and philosophers, and found in their writings a spark that would ignite his muse. Raza began to focus on the verses of Kabir, Ghalib, Mahadevi Verma, Agyeya, Gajanan Madhave Muktibodh, Kedar Nath Singh, Faiz Ahmed Faiz and others; he started using them in his paintings. Very fond of Hindi poetry himself he would often inscribe in his paintings a line or a verse from a Hindi poem and this would give an added visual and metaphorical dimension to his work. Often the Devanagari script instilled in his painting lent it an emphatic meaning. According to Vajpeyi, ‘Most times, when he put the word, the word came much later, more or less when the painting was finished… It was just there and he did not want either the painting to be subsumed by the word or the word to exhaust the painting. He allowed them to coexist in a simple visual relationship.’

Raza was to make a painting which contained a whole poem of the Hindi poet Nirala – an invocation of Goddess Saraswati inscribed in his exquisite handwriting. Quoting Muktibodh, he stated in another, ‘Viswa tama sunya main tahalti hai jagat samiksha‘ (This is the idea I’ve been working on for a long time). The notion of tama sunya – the dark bindu. Dark nothingness, but yet charged. Radiating energy in terms of colour that move from black to grey and going in space towards white. That is exactly the theme of my work.’ In the belief that from the darkness emanates all light, Raza’s dark bindus solidify during this period and their density seems to condense their immense potential. A black concentric circle pulsating with flickering lights, Bindu (1987) unfolds where the mother of all colours—black—gives birth to the surrounding red, yellow, white and blue reflected in its rotating orb. It is primarily the plastic qualities which interest him but also it is interlayered with a belief in universal truths, which transcend particularities.

Sayed Haider Raza: The Journey of an Iconic Artist 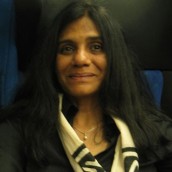 Yashodhara Dalmia is an art historian and an independent curator based in New Delhi, India. She has written several essays, articles and reviews on contemporary Indian art. She is the author of Amrita Sher-Gil, The Making of Modern Indian Art and Buddha to Krishna. She has also co-authored Memory, Metaphor, Mutations. Dalmia has curated several art shows such as The Moderns which inaugurated the National Gallery of Modern Art in Mumbai and the centenary show Amrita Sher-Gil: The Passionate Quest at the National Gallery of Modern Art in New Delhi, Mumbai and Bengaluru in 2014.