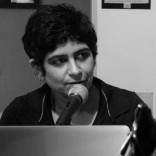 Zuleikha Chaudhari is a theatre director and lighting designer based…

The performative implies action and opens up questions of agency—how we live, how we identify ourselves and others, how we engage with and write history, and how we approach local versus global tensions and intersections.

Can theatre engage in contemporary social and political issues without compromising art or politics? What kind of knowledge can theatre generate that activism and theory alone cannot? What does it mean for theatre to function not just in but as ‘public space’?

I am interested in the connections between history, law, and theatre as different narrative strategies, which hold in common the tension between speculation and imagination as well as truth-finding and reality making. My investigations revolve around the question: What is ‘reality’ and how is it represented?

My projects Seen at Secundrabagh (2010 – 2012)—based on a photograph taken by war photographer Felice Beato in 1858 at one of the sites of the Uprising of 1857, Rehearsing the Witness: The Bhawal Court Case (2014 – 2018), Rehearsing Azaad Hind Radio (2018), and my current one, Re: Staging The Trial of Bahadur Shah Zafar are based on archival materials. These are historical events that may have occurred earlier but continue to hold relevance  in the present moment; ‘today’ is the result  and  continuation of what happened in the past – the event isn’t over yet.

The projects function as rehearsals. Principally, the disorderly process of thought and consideration with its related notions of contingency, interruption, uncertainty, version, repetition, and failure, are what constitute a rehearsal that proceeds to become the so-called ‘real thing’ of performance. I consider rehearsal to be a way of thinking and an operating strategy. When used as a strategy, the rehearsal foregrounds that which takes place on the periphery and might be obscured by the presentation of a polished final piece. I believe that practices of rehearsal can appear as links between aesthetic judgment and social or institutional critique, making a claim for the aesthetic and political potential in the unfinished project.

Rehearsing Azaad Hind Radio is a 40-minute video placed within the ‘set’ of a radio broadcasting studio. The work re-enacts selected broadcasts that Subhash Chandra Bose made from Berlin on Azaad Hind Radio, effectively outlining his political philosophy and strategies to attain independence. These were then interwoven with texts from  JNU’s Nationalism Lecture Series of 2016. The spine of Rehearsing Azaad Hind Radio consisted of my conversations with the four actors performing Bose; what do emotions, presence, and history mean in performance.

Commissioned and co-produced by Berlin Biennale for Contemporary Art, 2018 with the support of Goethe Institute.

The legitimacy of a legal trial relies both on its foundational sovereign source of authority and on public perception. To these ends trials, historically, have been staged events. They employ dramaturgic elements and theatrical devices. They have their peculiar scenography, their scripts and roles assigned to each actor. Trials also have their audience composed of the public, the media and their critics—as events, they only complete themselves in the presence of this audience. Legal scholar Robert Cover proposed the world of law as a system of tension, which bridges concepts of reality to an imagined alternative. According to Cover, these polarities are maintained and moved forward through the device of the narrative. It is through narratives that we build and understand the relationship between our social constructs and our vision of potential futures. These narratives require a leap of imagination in order to connect not only ‘what is’ and what ‘should be’, but also what ‘might be’.

Both theatre and law assert productions of truth and reality, the construction of narratives, a historical frame of reference, and the creation of alternative conditions with visions of the present. These parallels allow us to ask—how can theatre help us uncover and explore the dramaturgic character of all legal trials? What role can theatre play as a means of knowledge production, especially in the case of historical knowledge? In what ways does theatre’s capacity for mirroring and producing ‘reality’ allow for alternative legal processes to be imagined which for reasons of structure remain precluded from the courtroom? And lastly, can theatre help us arrive at different forms of justice and judgment that remain outside the reach of the courtroom?

My trial projects— Landscape as Evidence: Artist as Witness 2017 (ongoing), Rehearsing the Witness: The Bhawal Court Case and The Trial of Bahadur Shah Zafar, take the form of staged Commissions of Inquiries with real lawyers, a judge and different kinds of expert witnesses with actors or artists as key witnesses. The judgements are not pre-known. Who defines what truth is and what constitutes evidence? And what kind of evidence and/or testimony can the actor produce?

Rehearsing the Witness: The Bhawal Court Case (2014 -2018) Performance and exhibition

Acting is a form of reality production. An actor has been taught how to take on a character or become someone else; they use techniques of adjusting physicality, the construction of different emotions and the production of affect to create a believable reality. The actor is always acutely in the present, in the physical space where the performance is taking place but also elsewhere, in that other time and place where her narrative is unfolding. She is aware of her body (gesture and movement) and its position in space, of what she is saying, of what she may be feeling, of all that she remembers. She has to be able to watch herself, she has to watch those watching her. She has to be alert and alive, ready to respond to and calibrate everything in this moment and in the moments to come. What does it mean to not just watch but also to take action? And what does doing/acting entail? The reality and history of the actor’s body and its synthesis with and of ideas becomes a powerful embodied way of thinking. Is the actor able to disarm frameworks of certainty by insisting on the ethical and epistemic vitality of the intimate, the desired, and the imagined thereby producing a caveat to what people think of, or take for granted, as the ‘real’? Equally, can the actor provoke and call into being entirely new frames for constructing meaning acting as a catalyst? Does the figure of the actor, with her ability to transform—to open herself up to the possibility always already of becoming (an)other,  perform a citizen who is free, fluid, multivalent, hybrid, and unsettled–dynamic? 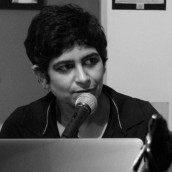 Zuleikha Chaudhari is a theatre director and lighting designer based in New Delhi and Mumbai, India. She is also a Visiting Faculty at The Dramatic Art and Design Academy, New Delhi. She was awarded the Sangeet Natak Akademi, Yuva Puraskar in 2007 and Charles Wallace India Trust Award, 2001/2002.