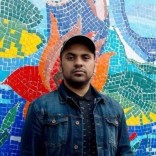 Arkapravo Chaudhury is a filmmaker, screenwriter and musician. Completing his…

Wednesday, January 11th, 2023, on a cold winter morning, the Indian people woke up to a historical moment for Indian Music and Cinema as Jenna Ortega, famous for playing Wednesday Addams on the Netflix series Wednesday, announced ‘Naatu Naatu’ as the winner in the category for Best Original Song at the 80th Golden Globe Awards ceremony held in the Beverly Hilton, Los Angeles, 15,000 kilometers away. The award recipient, Koduri Maragathamani Keeravani, composer and music producer of ‘Naatu Naatu’ and the entire score of the celebrated yet polarising movie RRR, had to beat a list of sensational popular artists to lay his hands on the Globe statue. The international Pop star Rihanna, the critically acclaimed theatrical Jazz-pop singer Lady Gaga, the Pop icon Taylor Swift, the veteran film composer Alexandre Desplat – all were in consideration. With this, ‘Naatu Naatu’ becomes the first ever Asian song to win this category in Golden Globe Awards.

As much as RRR‘s Golden Globe nomination in the Foreign Movies category came as a shock, the nomination for ‘Naatu Naatu’ as a song was one that was expected. The song played a pivotal role in taking RRR, a typical action-fantasy-spectacle from the famous director of Bahubali, SS Rajamouli, and throwing it into the stratosphere of international success. The film, being the most expensive Indian film to date, was already a huge box office success domestically and went on to break many records but met with lukewarm viewer stats after its streaming release on Netflix worldwide. Simultaneously, however, ‘Naatu Naatu’ was doing its job – and not so ‘silently’. The song became a worldwide phenomenon through TikTok, Instagram and other short video apps. From Japan to the USA, from Australia to Norway, people kept dancing to the tune and soon the wind caught the sail for RRR. Over the next few weeks, word of mouth on Twitter and other social media platforms catapulted the movie into what it is today—an international cultural phenomenon. A section of the American audience loved the movie to such an extent that they made it a point to make their frustration known publicly when India decided to send Pan Nalin’s critically acclaimed ‘Chhello Show’ as the official submission to the Academy Awards 2023 instead of the heavily anticipated RRR. The film saw many theatrical releases in the US where the disciplined Western audience, in a very uncharacteristic manner, let themselves loose to the tune of ‘Naatu Naatu’ and started dancing in front of the screen.

Strange as it may seem, such is the force and drive of this song by M.M. Keeravani. When I heard it first, it was my ardent belief that this song would achieve great heights. Besides being an entertaining dance number, the song possesses the technical and structural depth to be considered a notable composition. In an era when popular music and film songs have been reduced to mere background scores for the audience’s relaxation, focusing more on catering to the audience’s ‘zen’ than challenging them to think and get involved; when vocals are becoming flat, losing dynamics, and instrumentations are getting boring and predictable, ‘Naatu Naatu’ comes as a rare breath of fresh air.

It’s dynamic and vivacious. At its core, it’s a typical Telugu dance number with all the crazy percussion beats going on at double speed while the melody serves as a thread to keep the rhythm going. What stands out here is the immaculate production of a modern Electronic dance music mix. The kickdrums pumping the compression into the melodic lines creating a feeling of rhythmic motion—in a way that is reminiscent of something Daft Punk or Dedmau5 would do within the French House genre. The arrangement reminds one of the classic Big Band Jazz ensembles, where melodic differences create a harmonic unison to aid the rhythm section. Many instances of Carnatic classical music, a violin solo that acts as the bridge, and lots of folk and traditional elements make the whole song work like a dream. The experienced Keeravani plays with the stereo system, sending waves of drones from the left channel to the right and then back to left throughout the song.

The song’s choreography, like the music, is a rollercoaster ride and possibly the best shot sequence among a series of spectacular scenes in the movie. In a world of unrealistic action fantasy, for once, the song made the movie feel grounded. It could be seen as any other song and dance sequence from an Indian commercial movie or it could be seen as a tribute to the Hollywood musical era of Gene Kelly and Fred Astaire. The sequence—which plays as a symbolic revolt against colonialism, racism, and elitism—is also, at the end of the day, a simple romantic musical sequence that is very reminiscent of the ‘Good Morning’ song from the Hollywood musical classic ‘Singing in the Rain’. NT Rama Rao Jr, Ram Charan and Olivia Morris do a brilliant job of taking us back in time and reminding us of the trio of Gene Kelly, Donald O’Connor and Debbie Reynolds.

SS Rajamouli, being a master of spectacle and monumentalism, shot the song sequence in Ukraine, at the courtyard of the Mariinsky Palace (Ukraine Presidential Palace) in Kyiv, just a few months before the Russian invasion. Perhaps without even consciously realising it, Rajamouli’s work has resulted in a driving, shaking, enchanting brilliance where Hitchcockian camera works meet a traditional Indian frenzy. What starts as a party for the elite class, ends in a muddy dance battle – reflecting the soul of the film.

Everything said and done, it is time for us to confront a very crucial question here. What does the success of ‘Naatu Naatu’ mean for Indian Cinema and film music? Is this the start of a new era of Indian Cinema’s international celebration like that created by the likes of Raj Kapoor, Satyajit Ray, and Mrinal Sen? Or an isolated flash-in-the-pan moment like A. R. Rahman, Resul Pookutty winning Academy Awards or Lagaan getting the Oscar nomination or like the occasional appearance for Indian movies in Cannes, Sundance and TIFF—mainly in Documentary and Short sections? What makes Naatu Naatu’s success different is firstly it’s a song from an Indian film unlike Rahman’s ‘Jai Ho’ (Slumdog Millionaire), and secondly it’s from a big-budget mainstream commercial fiction movie unlike the ones appearing at Cannes, Sundance, or TIFF. As for RRR, it started as a fictionalised action-fantasy story based on two real-life freedom fighters’ lives made on a huge budget. Its success exceeded everything Rajamouli perhaps fantasised and dreamed of in his creative farmland. The overwhelming thumbs up from a section of Hollywood critics and filmmakers—ranging from the Russo Brothers to Edgar Wright—translated into Rajamouli getting signed by CAA, arguably the biggest talent management agency in the Hills. Rajamouli had won numerous awards and nominations already in the Critics’ Choice awards including the prestigious New York Film Critics Circle award for Best Director. Like Rajamouli, the actors, creative personnel and crew members all are enjoying their personal Xanadu at the moment and it will only grow for them.

RRR’s unique aspect is that it’s a quintessential Indian mainstream commercial movie made with utmost perfection and top-of-the-league technical excellence. The aspects of hero-worship and mythological stories making their way into folklore are not uncommon in Indian movies but to the Western audience, it appears as something unique and otherworldly. The success of RRR has certainly helped create a bigger audience base for future Indian mainstream movies—especially for South Indian movies which saw remarkable growth in domestic and international viewing numbers. Does it make things more challenging for Bollywood? The overwhelmingly Bollywood-monopolised ‘national market’ is now shifting towards South Indian movies.

As Bollywood tries to regain ground and reach for the stars, it’s hard to tell whether chasing the RRR dream is good or bad for the overall geography and history of Indian Cinema but one thing is for sure, it made the people in the film industry realise that there is no alternative to good stories and unique vision. We will all look forward to seeing whether RRR‘s Oscars campaign becomes successful in earning them a Best Picture and/or Best Director nomination but what we can anticipate is an Oscar win for M. M. Keeravani’s ‘Naatu Naatu’. I won’t be surprised to see the Academy Awards Ceremony guests showcasing their dance moves to the tune. In the end, here’s hoping this success paves a new path for Pop and Film song production and brings back the era of challenging, dynamic, and forceful music.

Amazing!
3
In Love with this Piece
0
Makes me think!
0
Mind-blowing
2 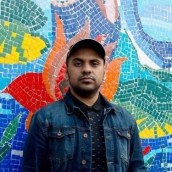 Arkapravo Chaudhury is a filmmaker, screenwriter and musician. Completing his graduation with honors in Physics from Asutosh College under University of Calcutta, he went on to follow his passion for cinema and music. His short films have been shown in international film festivals including the Madrid Art Film Festival. He earned several screenwriting accolades including multiple nominations at the Jaipur International Film Festival, New Delhi Film Festival, IFF New York and the prestigious Austin Film Festival. He is also a Western Classical trained violinist who currently plays guitars and piano, concentrating on Jazz, Blues, Latin, Bossa and Fusion music. Besides, he occasionally photographs paintings and sculptures; reviews film, music, and writes about football.