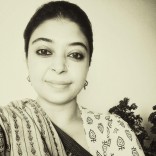 Sampurna Chakraborty is an art historian, researcher and writer, working…

Documentary film and painting: The crisis of representation

There are probably two ways of adapting to this year–considering a change in the calendar to mark 2021 as a temporal indicator of a post-pandemic world; or us denying the confinement of our bodily existence into a virtual one, moving out and reclaiming the corporeal sphere that will determine progressing forward and gradually moving away from the pandemic. However, reclaiming space, moving out, or advancing forward have not been entirely free-willed in the past year. There have been multiple socio-economic crises, deep-seated in the reclamation of space and existence. Therefore, as our world cautiously resumes normalcy with the restoration and regeneration of our endeavours, our methods of viewing and the layers of perspective demand deeper contemplation. The world has witnessed; humanity has been pained; many artists have responded; Kolkata Centre for Creativity opened up their physical gallery space with the exhibition ‘Hollow Times – Connecting Time, Space and Reality. The project had been initiated in 2019, in the pre-Covid era, where the perplexities were of different dynamics. However, the pandemic intensified the plight, changed the circumstances, and the artists responded from their individual sense of vulnerability, giving shape to this exhibition, curated by Reena Dewan, the director of KCC, and artist Rajib Bhattacharjee. The exhibition was on view from 13th to 26th February, 2021.

Before moving on to the heart of the exhibition, the title ‘Hollow Times’ awakens memories of two very poignant cultural commentaries – the first, is the poem ‘Hollow Men’ written by T.S. Eliot, published in 1925. The second was artist Abhijit Gupta’s unique and acidic satirical publication project ‘Hollow Times’, published from 14th March 2008 onwards. Both of these works, very interestingly address the cultural crisis that prevailed in their respective realms and narrate the heterotopic hollowness. The aesthetic and moral degeneration in a society or a community resonates with a displaced reality from what we consume, to what we conceive. Michael Foucault observes in one of his lectures titled Des Espace Autres (1967), “There are also, probably in every culture, in every civilization, real places – places that do exists and that are formed in the very foundation of the society – which are something like counter-sites, a kind of effectively enacted utopia in which the real sites can be found within the culture, are simultaneously represented, contested and inverted. Places of this kind are outside of all places, even though it may be possible to indicate their location in reality. Because these places are absolutely different from all the sites that they reflect and speak about. I shall call them, by way of contrast to utopias, heterotopias.” (translated from French to English by Jay Miskowiec – Of Other Spaces: Utopias and Heterotopias, 1984). Do read that quote again, if need be. Because this altercation and hence vulnerability of space, time, and reality is at the core of the ‘hollow’ that the curators and artists of this exhibition have attempted to articulate.

The first floor of the exhibition space at KCC is multi-dimensional with its curves free-flowing into unrestricted space divisions of the gallery. As the viewer walked in and walked through the gallery space, it opened itself up in different dimensions, which almost echoed the multi-disciplinary thrust of the institution. This spatial character added to the expanding questions of the ‘Hollow Time’. The first work that a viewer encountered was artist Rabin Roy’s ‘The Vehicle of History’. Humble, but very intelligent use of material juxtaposition made this work quirky with a very grounded narrative. The artist had drawn an analogy of this vehicle with a metallic hollow reptile, that crawls across the globe and our conscience—sucking power, endurance, human energy, and integrity and dumping them as a dormant pile of waste. The papier-mâché and wire-rolled human bodies almost voluntarily entered this hollow reptile’s metabolic pipe as it devalued and disintegrated human existence. This work took a macro view of the ever-growing shallowness of the time that we live in.

As in a linear narrative of a story, a reader’s attention is drawn from one chapter to the next, the exhibition too seamlessly flowed into the next work on display by artist Srikanta Paul. ‘Fairy Trail of Migratory Birds’ did not complain about any particular crisis, but it demonstrated a larger picture of various collective journeys that we make in our lifetime. The work had two halves. The first half consisted of a magnificent and bold, horizontal charcoal on paper drawing, which lent itself to the curve of the gallery space, depicting a row of ascending walking figures migrating through time, space, and multiple realities, evolving in different directions. Animals, birds, humans trailing through their individual circumstances and uncertainties, revealed through mimesis how each existence unifies through their metaphysical value, in contrast to how cohabitation is made to represent. The second half of Srikanta Paul’s work was a vertical scroll that projected an amalgamation of those migratory and individual experiences, which had been lived through the ages. That history of struggle, mimesis, and morality wove themselves in the warps and wefts of the fabric of time. The work evolved to a certain spiritual high that was not only meant to provide answers but also ask the right questions. As this vertical scroll pixelated to micro-narratives, the future scope of this work broadened further.  The core spirit of this work reflected the continuous journey of various struggles that keep changing their form with time; so did this tangible phase of the work, which must shift from one represented form to another.

The flow of display for this exhibition took me to the next work ‘Tombstone of Secularism 0000-1992’ by artist Rajib Bhattacharjee. He was the co-curator of this project and he hit the nail hard on the head. 6th of December 1992 will forever remain etched as a dark day in India’s social, cultural, and political history. The demolition of Babri Masjid also demolished our pride in India’s uniquely diverse, yet united and secular identity. Rajib Bhattacharjee created a fictional structure that was composed of various ornamental metal wire forms, which translated to multiple religious faiths coexisting harmoniously as a unified structure. Where there is utopia, Foucault’s heterotopia follows. Utopia is relative and so is constructing an idea of a ‘site’ that must uphold the sanctimonious and the absolute. In the politics of representation, it is always easier to establish a singular voice and opinion. That is dystopia, because it authorises one, over everyone. Bhattacharjee’s work constituted a shift in the paradigm of doctrinal values, displacing distinct organised religious systems to structural metaphors. Heterotopia is that imaginative space that creates altering narratives within a narrative. The tombstone as a detached element of the work, on which the time bracket (0000 – 1992) was engraved, presented itself to me as a bold, minimalistic individual work of art.

The year 2020 witnessed endless tragedies. However, one of the most haunting among them was the labour crisis that occurred during March and April, as lockdown was declared across the country. All the job centres, institutional bodies, and every form of revenue-generating structures had to shut down overnight. The scenes that followed were distressing and shameful, and the wound that was inflicted, this country and its people will have to nurse it forever. However, a certain adjective was attached to those labourers – ‘migrant’, who had to uproot their life and home and walk across towns and villages only to safeguard their survival. It should have been a verb – labourers who ‘had to migrate’, to safeguard their existence. Regrettably, they were treated as a subject classification and not as people, whose opinion and struggles only sound invaluable in theoretical or political discourses but not in their rightful existence. This trauma has deeply affected many creative practitioners across the country and disciplines, and Rajat Sen’s work ‘A Donkey’s Tale’ testified to that crisis. A fiber-cast wounded donkey, with baggage on its back, nonchalantly walked over scattered rotis on its path. By then it knew that there was no one to hear its cries for help, there was no one to take the burden off its back. And hence it must keep walking; it must continue on the journey with others. The work presented itself as a descriptive analogy with newspaper headlines and cuttings, bandaging and overlapping each other on the body of the donkey and also on a display board.

Resonating to the same crisis, Pradip Das’s sculpture ‘Diary of a Time’ projected a physical hollowness that a viewer was meant to enter; and then experience a trauma. The artist has consistently worked on subjects and materials that closely link to the working-class realities; and in this exhibition too his choice of material contributes largely to the layered but durable and determined space of vulnerability. Minutely etched across the iron sheet that envelops the curvature, the artist used found objects like brick, saw, and lift jack in various positions of the structure, creating windows of contemplation. The opening in the installation, unlike traditional sculptures, invited the viewer to walk in, where a disturbing video of a decapitated chicken still gasping for breath was on view. As disturbing as the reality was, the work promised tremendous potential if only the interactive quality of the sculpture could be further enhanced.

The exhibition came to its culmination with an ‘Untitled’ lightbox installations by the Taxi Artist Collective. Suman Samajpati & Sourav Roy Chowdhury found their path together in 2017 and started their journey with ‘Taxi’—a collective that explored and observed humans in various situations and circumstances. In this exhibition, they placed three wooden lightboxes that held black and white portraits of three people in classical compositions. LED multicoloured lights had been programmed in a manner that they changed and appeared in a sequence. The minimalism and humbleness of the work were astounding and inspirational. They mentioned in their note, “the language of light itself becomes a manifold manifestation of existence, where every illuminated face possesses both real substance and an illusionary sense of liberty”.  They successfully stimulated the viewers to look deeper, and observe longer. In these hollow times of ‘facelessness’ and ‘endless faces’, where individual rights and voices are ruthlessly muted, where no sphere seems safe enough to voice opinions, where liberty and free will is increasingly restricted; this work stood out as a polite and poignant reminder to not separate humans from their rights. 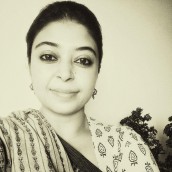 Sampurna Chakraborty is an art historian, researcher and writer, working on Institutional History, Art Pedagogy, Archival Methodologies, Spectator Participant Methodology, and Participatory Curatorial Cultures. She is currently pursuing her Ph.D. research from the Centre for Studies in Social Sciences and is based in Kolkata.