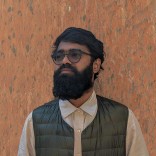 Siddharth Sivakumar is an entrepreneur and art writer, who regularly…

To Strike the Right Balance, it is Important to Realise that giving up is Okay: Abhilash Ningappa

If memory is our path to the past, then imagination works as the binder that patches up the potholes and helps us re-live a moment across temporal and spatial dimensions. But imagination is not only bound to actual lived experiences, or the past. When imagination subdues memory, it not only remains a way of re-living the past, but becomes a means of re-creating it. In this sense, Mibin Bhaskar’s work is marked by an overdose of imagination, where it moves away from the comparative stiffnesses of history and embraces the liberating excitement of story-telling.

There is a certain element of “play” that often heightens the drama in Mibin’s work. Between completing his works, as he develops the characters, Mibin is often seen playing with them, impishly placing them in amusing contexts and designing new encounters in an attempt to engender an alternative experience for them, for him and for the spectators.

On his Facebook wall we come across a photograph of such a transient installation done within a red tin-box. And in it lie a frightening alligator submerged in dark murky water. Decapitated human heads float around with open eyes, staring at the sky. The installation conforms to “thinking inside the box” as the predictable outcome of the encounter quite literally illustrates. But this is only the beginning.

In yet another installation, the same three-dimensional alligator has been lifted from the box and placed on an unfinished painting that already has two human beings painted on them.

What is happening here? Now “out of the box”, the alligator can be seen marching towards them. One of the men, locks his arms around his friend’s torso and pulls him away from the advancing alligator. But is that it?  The manic expression of the man facing the alligator, his apparent lack of fear in a countenance marked by frenzy, casts a shadow of doubt over our accustomed reading of the situation. It turns the table on what we thought to be a straight-forward narrative. It appears now that he is the one who attempts to pounce on the alligator, and shred the animal into pieces. Faced with an unintelligible madness the prosaic rules of the box, the logic of the real world, wither away.

If we now visit Mibin’s largest untitled work (2016-2018), we can see how in lower and upper tiers of the double-hammock both the conventional and unconventional outcomes of an encounter involving man and alligator play out, how indeed reality and fantasy—propelled by imagination—coexist in and co-create Mibin’s art.

In the lower hammock, amidst the host of other fascinating activities, one cannot miss the predatory alligators patrolling the water. While there is one that tries to pull down a man by his smock dress, others play around with decapitated human heads in their mouths.

Now if we move up to the upper-hammock again, near the right corner we notice two men. The one wearing sky-blue jumpsuit with orange floral print tears away the skin of an alligator with his teeth, spontaneously, like a villager peeling off a sugarcane stalk. Another man appears from behind him. Playfully he moves on his four-limbs, flaunting a headgear made of an alligator’s head with a rolling-eye and a dangling tongue. The menacing alligators from the lower hammock are simply picked up and toyed with by these men, not unlike the village boy who disembodies dragonflies in the back garden, casually, “just to see what happens”.

As a matter of fact, there are multiple instances in Mibin’s universe where we catch a couple making love. Often the process of making love seems to transform them from human beings to alligators. In such cases, captured in a moment of penetrating intimacy, and the clarity it brings with it, we are surprised to see how closely and intrinsically love and violence are related to one another. Between reality and fantasy, from predator to paramour, we slowly come to realise how these ostensibly contradictory forces of love and violence form the core of Mibin’s world.

Coming back to Mibin’s largest work, we notice how violence and love coalesce against a fantastic, yet naturalistic, backdrop, where the promise of love is often met with betrayal. Seated on a wooden chair, right above the well at the centre of the upper landscape, is a man in a striking red jumpsuit. His comparably larger build, physical positioning as the protector of the well—the source of water that vitalises the landscape and its inhabitants, additional embellishments such as skull-cap and garland around his neck, elevates him to the lordship of this mysterious land. In a sense, he is but the caretaker of his people, of his land. But he seems to be lost in his own little games, finding little selfish joys in uninhibited acts of violence. With extended hands he squeezes the living breath out of two green elephants. One imagines, these out-of-breath elephants would join the trunk-knotted elephants screwed into his chair, adding a bit of colour and horror to it, and gradually turning the chair into a throne.

Like any unwise leader, who has forgotten the language of love and compassion, he desires for more. From behind the throne, his attendant puts a hand over one of his eyes, as if to ensure that the leader is neither perturbed by his immediate reality, nor reminded of his responsibilities. Helpfully, the attendant holds a monocular to the master’s other eye, as his mind drifts away to some distant land, looking for other distractions.

At the other edge of the landscape another act is underway. From behind the obscurity provided by a monkey-mask, a man gives a fatherly push to the toy-horse his child is riding. Wobbly wooden wheels of the toy horse bumble towards the edge of the landscape, and so does the child on it. Will he fall and get lost into the chasm? Or will this fall be the child’s initiation to manhood? A fall to the real world where he graduates to the adult games of danger and death—like the men playing with alligators and elephants?

Whether it is the depiction of the failed leader or the failed father, the story Mibin tells is that of paternal betrayal. The monocle and the hand of the attendant—like a mask—essentially covers the leader’s face, his betrayal and guilt, as does the father’s grinning monkey-mask. But at the threshold of hybrid identities, Mibin’s masks reveal as much as they conceal; the seemingly comic chords now ring with sombre tenors of tragedy. Life’s lessons, values and vices trickle down from top to bottom, quite like what we witness in our quotidian life, in the real world. The example set by the father of the community—or nation if you will, is followed by the child’s father, and these might very well be the lessons the child learns and teaches when his time comes.

When we enter an impasse with reality, which lies beyond our reach or influence, often we are seized by something primitive. With a dysfunctional moral-compass, no appreciation for the language of love and compassion, the inner world lost at the limits of verbal communication takes recourse to non-verbal expressions. Emotions get communicated through instant expressions of violence—even in intimacy, even in a father’s affectionate push.

Mibin develops an artistic language that can accommodate and normalise primitive impulses. It can stretch in time and absorb an outburst, and even slowdown a reflexive action without sacrificing its impact. It is not an uprising, but a slow evolution that struggles on to find meaning. It lingers on like a puzzling dream that flickers between meaning and meaninglessness. As human beings we have a unique need to find meaning and purpose in life. And when we succeed to make sense of other people, and the world around us, it creates the illusion that we are in-control. Even when we look at a work of art, we are often led by this same urge to decipher it, to make sense of it. This feeling creates a certain sense of empowerment. Mibin’s language of art crushes this false sense of easy empowerment.

In a sense, like the Dutch painter Hieronymus Bosch, Mibin plays around with fantastic outlandish imageries, but unlike him Mibin refuses to conform to a discernible lingual framework that allows one to follow the artist’s narrative, for instance, in Bosch’s case the pre-existing tripartite Christian world-view consisting of heaven, hell and earth provides a narrative-trail for his spectators. Actually, Mibin’s affinity to create hybrid creatures and test the limits of conventions place him close to Luigi Serafini, the Italian artist, architect and industrial designer well-known as the creator of Codex Seraphinianus (1981)—an illustrated encyclopaedia of an imaginary world. Like Serafini, Mibin doesn’t give his spectators an easy understanding of his artistic language. They are left with an unfathomable fantasy that, at times, appear uncomfortably familiar.

One might also come to the conclusion that communicating with the world he creates, and the world he inhabits, is far more important to Mibin than trying to communicate with his spectators. Therefore, besides the unique style he develops, the visual language he employs rests heavily on the substance of his livid experience and beliefs, and the emotive response his content and characters invoke.

Marginalised people, like the ones Mibin got to know closely while living in the Santhal village in Santiniketan, assume larger than life personalities in his artistic universe. At the centre of his universe, they stand tall enacting their will and whimsy unapologetically. In his paintings they do not feel compelled to explain themselves, and in this regard their position is very close to Mibin’s, who had once believed in the Marxist cause, but realised overtime that one cannot use the master’s tools to dismantle the master’s house. So, he makes an attempt to leave behind conventional aesthetics of the West, as well as traditional conventions of the East, as emotions and feelings get communicated in a visceral language by touching a primordial nerve in his spectators. It is also important to note that the question here is not if the subaltern can speak, but if the subaltern wishes to speak at all and unveil themselves for our understanding. Let’s not forget that being un-answerable for one’s action and leading a freewheeling life is the height of power in today’s world.

Amazing!
1
In Love with this Piece
0
Makes me think!
0
Mind-blowing
0 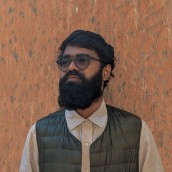 Siddharth Sivakumar is an entrepreneur and art writer, who regularly writes on visual art and culture for print and online publications. Siddharth also heads the Visual Arts and Publishing departments at KCC.