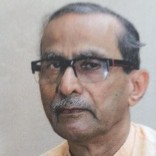 Dikshit Sinha trained as a Social Anthropologist, spent his early…

More than 155 long years have passed since Tagore was born, and nearly nine decades have elapsed after the Sriniketan programme began in 1922, but no detailed account exists about the way the development work proceeded at a time when social decadence was at its height. The complete story of how Sriniketan’s experiment was carried out remained imperfectly understood even by the insiders let alone by the outside world. Even many students of the university remain oblivious of the course it took, its extent and its depth. How a poet inspired people from far and near to participate and work for the development of the villages and how it gradually evolved is worth recounting. It was not a development work undertaken for the sake of so-called developmental purposes only. It was based on formulation of values and ideology. The mammoth task had acquired significance during its own time and is no less important and relevant in the present age when development has become a mere by-word.

At a period when the postcolonial theory did not even appear; he (Rabindranath Tagore) pointed out how the British colonial rule altered relationship between the ruler and the subject, affecting every walks of life. In several articles written during 1893-1908, he showed how the British imperial economy erected a hegemonic mechanical political system, subjugating the people, dominating and colonizing the Indians’ mind. It constructed an overbearing imperial power by depicting Indians as uncivilized, degenerate; incapable of ruling themselves as the rationale for the colonial rule. It was a dominance by a nation, and not a rule of a single ruler as in the past, leaving people little choice to lead a free life. Their governance was not for establishing relationship with people but to demonstrate their brute power. It produced subservient, obsequious, demeaning mentality and a parasitic mind producing cultural atrophy, as an average Indian was simply considered as a ‘cow of their pasture’. Instead of uniting the diverse communities and merging them in a broad nation, it practised divisive communal politics, replacing the humanitarian relationship with crude mechanical political system trampling on the people and their culture, forcing them to accept the British superiority. Under such abnormal condition, political system or striving for self-rule for instituting welfare and modernizing the society was not possible; the only way out was to take over this role by the people of the country themselves by fashioning their own educational system, keeping humanism at the centre and strengthening the society from within. He went on to construct an elaborate framework for achieving the objective.

An early sign of development of a counter-ideology to the nationalists’ project of reformation of castes was evident in his attempt to formulate the necessity of collective existence and rational and egalitarian view of development as a way out of the problems faced by the society. It revalorized and placed culture and social relationship on a universal plane by banishing the negativity of divisiveness of religion, caste and rituals and drew attention to the problems of marginalization of people. He consciously rejected the centrality of political power in welfare because its divisive role banished large section of people to a peripheral existence. Instead, he brought in the importance of welfare as the society-centric concept, uniting all sections of people. At that point of time, the ideas outlined here were still in a nascent state. But these eventually led him to analyze the situation that prevailed in the country, diagnose the problems and sought deliverance from these. The European ideology of ‘Enlightenment’ that refused to be guided by established opinion but by rational thought process, began to filter through among the new western educated middle class of Bengal. However, it remained limited among a select group of people of the middle-classes. The accent was on selective changes rather than on holistic change of the society. Tagore tried to answer why this approach needed change and in what manner.

The central aspect of creative development lay in rebuilding and reconstituting the relationship at all levels and with the world around, ensuring collective living, enabling people to see their surroundings through a rational prism, creating a liberating atmosphere of harmony, a state of ‘positive freedom’ through anchored and reciprocal relationship, tied up yet emancipated, expanding and enhancing human beings’ competences in every sphere of life.30 Therefore, this process of transformation cannot be brought about by a passive process of construction but through a creative process, making the people realize their own living conditions, enabling them to choose and fashion their own lives and, over and above all these, to bring out the inherent qualities of a sense of humanity.

Tagore’s development paradigm was based on a broad framework that consisted of concepts of indivisibility of life, primacy of humanity (manushyatta), harmony and collective unity of human beings (oikya). These were again related to his concepts of totality, akhandata. This sense of totality unites people and enables them to realize freedom and welfare. Because, the human being .

..is not exclusively an individual: he is also one in spirit with the universal Man, under whose inspiration the individual is engaged in expressing his ultimate truth through crossing nature’s limitations. He characterised these expressions as true, the good, the beautiful; not only from the point of view of the preservation and enrichment of society but from the completeness of his own self.

Severance of relationship militates against nature’s innate harmony and unity with the natural process and leads to alienation from the spirit of unity and creativity. Tagore pointed out the unnaturalness of human being’s free and unrelated state; at every step his dependence on fellow human beings is pronounced and emphasized that man reaches the state of completeness only when he enters into relationship with other human beings and a state of unity is achieved. He went on to point out that this incompleteness gets transformed to a state of completeness when it leads to collective fashioning and refashioning of social relationship that leads to progress of society and civilization. While construction is connected with fulfilment of mundane needs, creativity is resorted to the urging of the inner self, for the creation of a complete self. This view is transposed on the social world where the ultimate aim was to strive for the wholeness of social relationship, permeating the world with a sense of commonness of the fundamental state of humanity. This view of differences between construction and creativity was also reiterated just before Sriniketan project was launched on February 6, 1922. In his reply to the felicitation accorded by the Gujarat Sahitya Parishad, on April 1920, he differentiated ‘construction’ from ‘creativity’; construction is ‘for a purpose’ fuelled by wants while ‘creation expresses our being.’

Man’s highest creation is his society. It has innumerable conveniences for him, but its true worth is in the highest expression of himself which he finds in it. Therefore, it is in its ideal perfection that society has ultimate value to man. For it is a world where he finds himself revealed in his greatness where his true nature has the best freedom of manifestation (emphases added).

Arguing further, he posed the eternal question, ‘what is the truth of the world?’ The answer provides clue to his concept of holistic existence of the world and society. According to him, the world does not consist merely of congeries of materials nor is society a mass of human beings ‘but their universal relatedness.’

(…) the truth of this world is in its law of relatedness, that is to say, the law of keeping step together. For, the world is a movement, and this movement must not be retarded in any of its parts by a break of cadence. The world of man is suffering the pain, because its movement are not in harmony with one another, because the relationship of races has not yet been established in a balance of beauty and goodness (emphases added).

Material development is necessary but devoid of harmonious relationship it remains vacuous, so is mere amassing of wealth. He pointed out that the Hindu deity Laxmi, the symbol of wealth, ‘is not the Goddess of the cash balance in the Bank, she is the ideal plenitude which is never dissociated from goodness and beauty…‘the Yaksha Kuber’, the symbol of mindless amassing of wealth on the other hand, ‘is depicted … as a corpulent creator with feature thickly opaque to the light of idealism’. 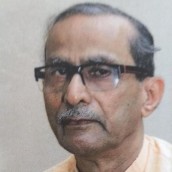 Dikshit Sinha trained as a Social Anthropologist, spent his early years as a research worker at the Asiatic Society and Anthropological Survey of India, Calcutta. He then moved to the department of Social Work, Sriniketan, Visva Bharati. He has published extensively, both in Bengali and in English, on tribes and various aspects of rural reconstruction wok, social, and culture life of the slum, village social life, and impact of panchayat on society and economy of West Bengal etc. His books include Tribal women (ed), Hill Kharias of Purulia, and Rabindranather Palli Punargathan Prayash (Rabindranath's rural reconstruction).