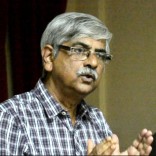 Sanjoy Mukhopadhyay is an eminent Professor of Film Studies at…

Today, the scopic regimes of modernity in which we live, demand that even an original work of art should be reproducible, preferably by moving images.  But is it even possible/ desirable to ‘document’ a painting using the medium of film? This seems to be a very intriguing question because we, more often than not, encounter cinematic adaptations of paintings.  Notwithstanding their relative success or failure, I remain in doubt whether painting can be positioned as a pro-cinematic piece of art although I never question the usefulness of documenting a particular piece of painting or sculpture. These reproductions can serve as historical evidence. At the same time, I do recall that North European painting traditions are often considered to be more pro-cinematic as compared to Renaissance paintings.

In any case, very famous examples of such attempts in the history of cinema would include Alain Resnais’ short film on Van Gogh and also his more famous work on Picasso’s Guernica. Even though the films were made by very competent artists like Resnais, public reactions were outrageous. They did not hesitate to label Resnais ‘immodest’. Resnais was spared only at the intervention of Bazin, the great realist-theoretician. Why was there this discrepancy between the artist’s vision and the ensuing public response to it?  I would submit that the functions of the frame in the cinematic images and paintings are fundamentally different. The problem lies in the fact that the French viewer expected to see the picture as ‘painted’, but while watching through the instrumental lens of cinema, the experience of looking was profoundly altered. Space, as seen and experienced in a painting, gets radically destroyed by the screen. One may enquire as to why this is the case. The answer is simple. Basically, the frame of a painting encloses a space in direct contrast to the natural space in which the experience occurs. A painter’s representation of space is rather inwards.

On the other hand, conceptually, the outer edges of the screen are not the frames of the film image. They merely reveal partial reality, the whole of which continues beyond the edges of the screen. In other words, while the frame is centripetal, the screen is centrifugal. In a frame, everything is converging, whereas on-screen there is clear divergence or outward movement. That is why the basic flow of movement in Guernica is lost in its cinematic version.  However, we have no reason to condemn Resnais. Momentarily if we turn our attention to another great filmmaker Akira Kurosawa, and specifically to one of the segments of his unforgettable magic realist film Dreams, we realize pronto that in comparison to Resnais, his portrayal of Van Gogh was more successful. He owed his success to the fact that Kurosawa did acquaint us with the structural differences between painting and film. He compared and contrasted both the media in an exquisite way. Kurosawa’s training as a student of painting helped him deliver his heartfelt tribute to Van Gogh.

In fact, Van Gogh often acts as a darling to filmmakers only because of his representational mode. A careful investigation of the Dutch painter’s works would expose that his revolution lay in the fact that he, like a true iconoclast, forced painting to come in close liaison with music. His violent lines convincingly cross the boundaries of the frame. They go outward. Instead of converging, they diverge.

Van Gogh’s penchant for incorporating motion appears to have also helped Kurosawa’s craft. Even when the moving camera sits idle, the elements inside the ‘frame’ are in motion as we are watching and experiencing it, and with it, our eyes and spirits are also moved. Movies that end with a fade-out on a continuing action or with a frozen frame show how ‘endlessness’ or ‘continuity is at the core of the cinematic medium—no tableau can put an end to visual flow or the flow of temporality.

Let us now consider the case of The Inner Eye – Satyajit Ray’s masterpiece on artist Benode Behari Mukherjee, who was Ray’s teacher during his Shantiniketan days. To my mind, the Inner Eye is a brilliant documentary not only because Ray managed to successfully narrate a chronological account of Benode Behari Mukherjee’s development and his unfortunate blindness in later years, but also because of his dexterity in locating a kind of untold motion in Benode Behari’s murals. Satyajit made a horizontal journey through the murals but never lost his objective; he embraced the responsibility of formally translating Benode Behari’s mural to the foreign cinematic medium. One of the most striking points in the film is the depiction of Dasaswamedh Ghat at Varanasi by both Benode Behari and Ray. Not only these two contradictory representations shake hands but also enter into a conversation on the nature of visual culture itself.  The Inner Eye, therefore, is a more successful exercise that attempts to sincerely comment on the limitation of translation rather than the illumination of an artist in totality.  The same thing is also true for Ritwik Ghatak’s unfinished project on Ramkinkar Baij. The rushes, nonetheless, reveal that Ghatak refused to stay within the domain of neutrality. On the other hand, we can see for ourselves how the subjective and inquisitive camera discovers Ramkinkar’s greatness from the most unusual angles. It is impossible to miss that in his sculpture of Tagore, the poet’s long hair has been cut by Ramkinkar, and Ritwik Ghatak very consciously attempted to handle these subtle moments as observations on the agony of an aging artist. In his sculpture of Buddha, the sweat shown as water droplets on the skin of the saintly Buddha has been emphasized by Ramkinkar; and Ghatak—like a true admirer—recorded it in his camera to preserve the austerity for the screen. Ultimately what Ghatak does is create magic as he comes closer and closer to Ramkinkar, eventually transforming the artist into a work of art.

The Magic of Kerala’s Animated Masks

When I say film and painting are different media, I actually underscore the point that every great art form lives within its own enclave and has its own autonomy. It may be communicated to us to a certain extent but whenever we try to translate something the experience alters significantly. Jean Luc Goddard in his 1982 film Passion showed us a series of classical paintings – among them was Nightwatch by Rembrandt. At one point in time, he cried out in despair that even the best studio in Europe could not fix the lighting pattern which was present in the original canvas. One can at most try to create a copy, but the copies cannot attain the grandiose of the original Leonardo, Goya, or Delacroix.

This is where our thoughts come to a standstill, and this is what inspires me to actively participate in the debates around painting and films in India and abroad. Let us further proceed to this abstract space where still points of motion can be located. 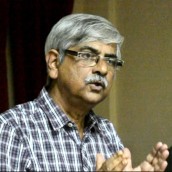 Sanjoy Mukhopadhyay is an eminent Professor of Film Studies at Jadavpur University. He is mainly known for his writings on cultural modernity in India. He is also a known Ritwik Ghatak scholar and author, as well as a commentator on social issues. Prof. Mukhopadhyay has several publications including books.