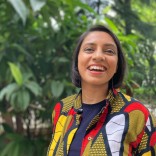 Bharti Lalwani trained as an artist at Central St. Martin's… 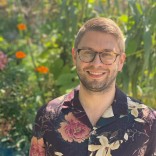 Nicolas Roth is a Researcher, Writer and Horticulturist. He is…

Videogames as Art: Interactivity, Resistance and the Need for Curated Awareness

Bagh-e Hind is an exhibition of Mughal and Rajput paintings from the seventeenth and eighteenth centuries, curated by Bharti Lalwani in collaboration with Nicolas Roth. Along with the breathtaking paintings, elements of olfaction, taste, Hindustani music, Urdu poetry and Ray’s cinema have also been put together to recreate the essence of Mughal-era South Asia. The aesthetic and sensorial decadence foregrounded in the exhibition intends to seek a holistic/comprehensive approach to material histories of the time.

Rose bushes as far as the eye can see, narcissus stems delicately held by courtly gentlemen, stunning displays of fireworks, irises in formal flower beds, and a discreet lovers’ hideaway  decorated with a bed of flowers amid a lush forest.

These are just some of the garden and plant related details that can be found rendered exquisitely in Mughal and Rajput paintings from the seventeenth and eighteenth centuries. Beyond the obvious resplendence that draws in the eye, such paintings are abundant with olfactive cues that signal a world of sensorial pleasure.

With the garden as our unifying theme, Bagh-e Hind is sectioned into five chapters: Rose, Narcissus, Smoke, Iris, Kewra. Five core paintings serve as the basis of the exhibition. We identified the plant materials in the paintings as well as any other olfactory and flavour references the works contained, and we discussed the cultural and literary context for the scenes depicted –– the way they might allude to tropes from poetry, for instance, or to religious practices. All of that went into conceptualising the respective scent and synesthesia translations.

Much more so than today, gardens in the Mughal Period were central to South Asian social and cultural life, especially for the more privileged sections of society. They were of vital importance both as lived spaces and as a form of representation. Extensive, formal gardens, commonly located along riverfronts and in favoured suburban locations just outside towns and cities, were a quintessential marker of prosperity and social status, and they were also where much social and political life was ideally envisioned to take place. The latter we can see quite clearly in the paintings at the heart of our project, and innumerable others like them, which place everything from lovers’ clandestine meetings to royal audiences and gods at play within the same distinctive, Mughal type of garden.

In choosing the paintings, we considered several criteria. Most importantly, we looked for pieces that contained at least one fairly obvious, deliberate depiction of a fragrant flower or other olfactant, ideally with larger cultural significance. These defining notes became the names of the five chapters and their respective scents. We also sought works that were good representatives of particular genres in 17th and 18th century South Asian painting, and in the online exhibition we paired each main painting with a cluster of related works. This pattern in early modern Indian art, with multiple artists iterating on the same themes and compositions, is almost never highlighted in exhibitions or art historical publications. However, it is in fact a rather ubiquitous and defining aspect of early modern South Asian artistic production, and looking at the paintings in this context really helped reinforce meaningful features such as olfactory elements and poetic allusions that might otherwise escape the notice of contemporary viewers.

Galleries embedded within each chapter expand on not just the paintings, but also gardens, objects and synesthesia. Where possible, labels in the galleries include source links so audiences can go to  institution sites to explore further. Photographs of lush gardens and our selection of magnificent pleasure-paraphernalia drawn from international collections make the appreciation of sensual details in paintings all the richer.

The Synesthesia gallery meanwhile invites audiences into the process of crafting the perfumes and edible perfumes via photographs of the rare and precious materials accompanied by their detailed descriptions. We have also presented documentation of concept sketches for perfume flacons that were then crafted by a local glassblower for this exhibition.

The paintings and botany are paired with 18th century Urdu poetry, and our own working dialogue appears at the end of each chapter that illustrates our collaborative process. Such elements of pleasure-viewing are also enhanced by classical Hindustani music. We commissioned Berkeley-based architect Uzair Siddiqui to match each painting to a raag or in the case of Chapter 3, “Smoke”, to a clip of a kathak performance from Jalsaghar, a 1958 Bengali film by Satyajit Ray. Audiences can click on icons of musical notes attached to the main paintings in order to access the sound components.

“Smoke” is an unusual chapter. Where “Rose”, “Narcissus”, “Iris” and “Kewra” distinctly spotlight these specific flowers in the context of gardens, the “Smoke” chapter revels in this imagination of the scent and splendour of a garden-celebration at night time with fireworks illuminating the dark sky. Here, we feature multiple nearly identical genre compositions of women lighting sparklers and watching fireworks on a garden terrace. In one Mughal version, they are attending to a Muslim Mughal noble; in a slightly later one from the Hindu Rajput court of Kishangarh he has been replaced by the Hindu god Krishna and his consort Radha. Seeing the works together highlights how a shared regional visual language often transcended seemingly defining distinctions such as religion.

Much of the artwork we include in Bagh-e Hind was produced at the courts of Muslim dynasties, especially the Mughals, and for the last century or so would have been most commonly studied and displayed under the rubric of “Islamic Art”. Moreover, the research behind the exhibition draws heavily on primary texts in Persian and Urdu, languages whose literary traditions generally reflect an Islamic cultural context, even if many writers and significant sections of their audience in early modern South Asia were not themselves Muslim.

At the same time, we have incorporated several paintings in the exhibition which were produced at Hindu courts and in some cases contain explicitly Hindu references yet nonetheless share a pictorial idiom and genre conventions with other pieces that would be seen as Islamic. It is in order to let these works speak to each other without being boxed in by the usual identitary categories that we largely avoid the traditional religious categories and also emphasise that the project includes Mughal and Rajput paintings. We hope that this brings to the fore some truly remarkable connections.

For “Smoke”, we have a gallery of “Fireworks” in the place of “Plants & Gardens” that shows illustrations of fireworks from a 19th century Persian-language Risalah-i atishbazi or “Treatise on Fireworks”. The perfume translation for the painting Samsam al-Dawlah Khan Dawran watching a fireworks display, Delhi, c. 1719–1725, recreates the smell-sensation of acrid firework-smoke, like gunpowder that has just burst in the air, slowly dissipating to reveal the scent of night blooming flowers, wet soil and cedarwood trees. A hint of jasmine sambac appears towards the end with its characteristic burnt-rubber top note. In order to translate this atmosphere onto the palate, we crafted a salted cocoa powder flavoured with ambergris, tonka bean, black cardamom, and dried black cherries. Organic menthol crystals beaten into this powdered mixture adds a tantalising touch that simulates the sensation of fireworks fizzing on the tongue.

This painting details a tray of perfume bottles and unguents in its lower register, as well as an elaborately crafted incense burner. We have attempted to communicate this impression through a series of two to five minute videos of burning incense in our Synesthesia gallery. Audiences unfamiliar with oudh and bakhoor, can see the fumes wafting off a piece of gently heating sandalwood from Bangladesh, or see the resin oozing out of fizzling Omani frankincense and Sri Lankan agarwood.

Bagh-e Hind intentionally foregrounds a pleasurable approach to history. We take a playful route towards delineating material histories of Mughal-era South Asia by creating experiences of drinking a rose garden, inhaling Urdu poetry, eating the architecture or listening to the painting.

Our work of course did not arise in a vacuum; from an academic perspective, it draws inspiration from a range of work that focuses on the sensory aspects of South Asian history and heritage, including but not limited to smell. There is James McHugh’s wonderful study of smell in ancient and medieval India, Sandalwood and Carrion: Smell in Indian Religion and Culture, the work of Daud Ali on gardens and courtly culture in ancient India. For some reason, publications on the Deccan in particular tend to foreground fragrance and other sensory aspects, including the work of Ali Akbar Husain and a volume of Marg edited by Kavita Singh with the evocative title Scent upon a Southern Breeze. We would also be remiss not to mention Dipti Khera’s magisterial The Place of Many Moods, which argues powerfully and beautifully for the importance of the sensory and emotional experience of particular moments in space and time as the key to understanding the distinctive paintings produced at the court of Udaipur in the eighteenth century. A number of these works appear in our exhibition, including the main painting in the “Rose” section.

Additional to our galleries, the online exhibition catalogue contains our research essays, a reading list on gardens and perfumes, and continues to evolve as we commission essays from guest collaborators. A new page “Bagh in the real world” continues to document our ongoing curatorial collaboration as our concept manifests in physical spaces across the globe. 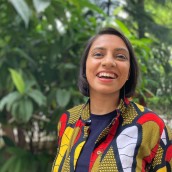 Bharti Lalwani trained as an artist at Central St. Martin's College of Art and Design in London and later at The Sotheby's Institute of Art in Singapore. While she has produced writing on international art, much of her criticism is focused on contemporary art of Southeast Asia. She established Litrahb Perfumery in 2018 to explore a new language of fragrance and flavour as extended mediums of her critique. In 2021, she launched the project 'Bagh-e Hind: Scent Translations of Mughal and Rajput garden-paintings'. 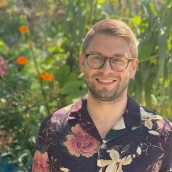 Nicolas Roth is a Researcher, Writer and Horticulturist. He is a research scholar with a PhD in South Asian Studies from Harvard University. The focus of his academic work lies at the intersection of literature, intellectual history and material culture in early modern South Asia, with a special focus on the history of gardens and horticulture and their representation in text and image. He lives in Boston.