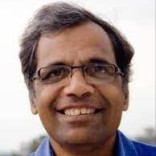 Udayan Vajpeyi is a Hindi poet, essayist, short fiction and…

in the moonlight, a worm

digs into a chestnut.

Traditional Indian linguistics envisages three powers in words – abhidha, lakshana and vyanjana. Abhidha is the first or the surface meaning of the word in a sentence. For example, when I say gangayam ghosh in Sanskrit, the first meaning of the word i.e. abhidharth is ‘the house in Ganga river’ which of course is ridiculous and stands cancelled. In contrast, its laksharth, i.e., second meaning, which is lakshana, is ‘house very near Ganga’. However, its vyanjana or third meaning happens to be ‘a house which has coldness and holiness’. According to Anandvardhan, an ancient theoretician of poetry, all good poetry attempts to generate the vyanjana, i.e., the third meaning. This third meaning need not be as clear as it seems in our example. It can, in fact, be quite uncertain and can lead the reader or listener of the poetry into most uncertain, indefinable terrains.

Poetry attempts to say with words what cannot be said by them. ‘Sayability’ in the world of poetry is just a burden that all good poetry tries to get rid of as soon as possible. Therefore, all the techniques of writing poetry are technologies to enter into unsayable zones with the help of words which, at the end, burn endlessly on the altar of the unsayable.

While sweeping the yard

It forgets about the snow –

According to traditional Kavyashastra the worst that a poet can do is to state the statable, say the sayable, paint the paintable. Because in doing so the poet does not bring to life the varied power of language and words that he is supposed to, by virtue of being a writer, someone whom Flaubert describes as ‘artisan of the sentence’. These are considered to be qualities of poor writing. They may help create good pamphlets but will necessarily end up creating ordinary poetry. My teacher once told me that what is sayable can be said with the help of words but what remains unsayable in spite of words – that which words long to express – is what is called naam, the enigmatic notion of name which the great Bhakti poet Goswami Tulsidas refers to in his Ramcharitmanas at length. Thus, it can be said that poetry is the art of making it possible for the reader or listener to experience naam, the naam which pulsates beyond language (Derrida would have said that the ‘beyond’ of language is also part of the language, but I would argue that even though this ‘beyond’ may be part of language, it lives not in the words themselves but in the space left open by words – like shrutis which are not swaras but dwell in the infinity of the space between every two swaras, notes; or the way akaash, space, vibrant space is made palpable by the walls surrounding it).

sound of the rapids.

The Vyanjana power of the word is the recognition of the presence of uncertain zones lurking beyond language which endlessly lure the words to evoke it. We can, in fact, say that the very presence of the vyanjana power of the words is indicative of their Ionging to go beyond themselves. Poetry is a meeting place for the longings of the poet and the words to go beyond the words into the realm of naam. The forms that appear in poetry, microforms or not such microforms, attempt to go beyond the formable; they are mere longings of the words – fulfilled or unfulfilled – to bring into reality that which Iives beyond reality or at very source of the reality, to wrap reality with the shining layers of the ‘other worldliness.’ This, perhaps, is what Anandvardhan meant when talking about poetry he said that it was “discovering the other worldly or extraordinary in the ordinary”…

the harvest moon had blossomed,

Sentences in poetry are sayables. In fact, in Sanskrit and Hindi the word for the sentence is ‘vakya‘ which almost means ‘sayable’. These ‘sayables’ are used in a poem to create an architecture which allows the ‘unsayable’ to become palpable in the same way that walls are raised in a building to make akaash, space, palpable. When the reader is brought in contact with this unsayable-ness he loses his identity as an individual self and regains it as that of an omniscient being, a process that Abhinav Gupta called aprimit pramatrittva. This transformation gives pleasure to the reader and he experiences what is called rasa. Rasa is the experience that a reader goes through when he gets rid of the burden placed on him by being confined within the limits of being an ‘individual’ and feels free of all enclosures that he lived within. This happens only for a short duration of time which is why the pleasure of the text, rasanand is traditionally compared to the brahmanand, the pleasure of the brahman, of realizing that there is no duality between self and the world.

On a bare branch

There is another key concept – the concept of chhand – on which I would like to dwell for a while. Often incorrectly translated as meter, chhand is a much more complex concept which comes closer to the idea of duration as envisaged by Bergson. Bharat muni also says that there is no word without chhand and no chhand without word, which means that chhand is something which cannot be fixed and which keeps getting endlessly reinvented by poets. I propose that we try and explore the idea of the chhand in a much deeper manner. First and foremost, there cannot be any art-form without chhand. Chhand is the fundamental necessity for the constitution of any art-form including poetry. As we have already seen, there can be infinite types of chhandas; the list of various chhandas which is found in many traditional texts is just an example of the several types which were in practice till that particular text on chhand was written. I think that the main purpose of having coarse chhand in an art-form is to create a delay between the material of the art-form and its meanings. In the case of poetry the material is the language and the meanings, as we have already seen, can be of various kinds. Once the reader is able to attend to the material of the poetry he experiences the movement of the mind from material to the first meaning, abhidha, then to lakshana (if there is some laksharth in the words) and from there to the vyanjana. These movements from material to the meaning(s) can be of various kinds and Anandvardhan’s dhwanyalok describes them in great detail. I will not go into that but will only say that this movement from material to meaning causes the reader to experience a certain kind of delay, a subtle feeling of time or in fact micro-time, that causes him to experience his journey from being an individual self to being a omniscient being, the so-called aprimit pramata .The delay caused by the movement from material to meaning(s) has many forms. I will go to the extent of saying that these forms of delays carry the signature of the poet, and it is these delays that I would like to call sukshma-chhand, or micro-chhandas. 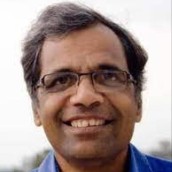 Udayan Vajpeyi is a Hindi poet, essayist, short fiction and script writer. He has published two volumes of poetry, a short story collection, a book of essays and other miscellaneous publications. In his work one finds a simultaneity of past and present; of patterns, rhythms and events swirling together in one vast continuum. Much of his writing is shot through with silence and a brooding sense of loss, making the corpus of his work all at once concrete and strangely illusory, tangible and dreamlike.